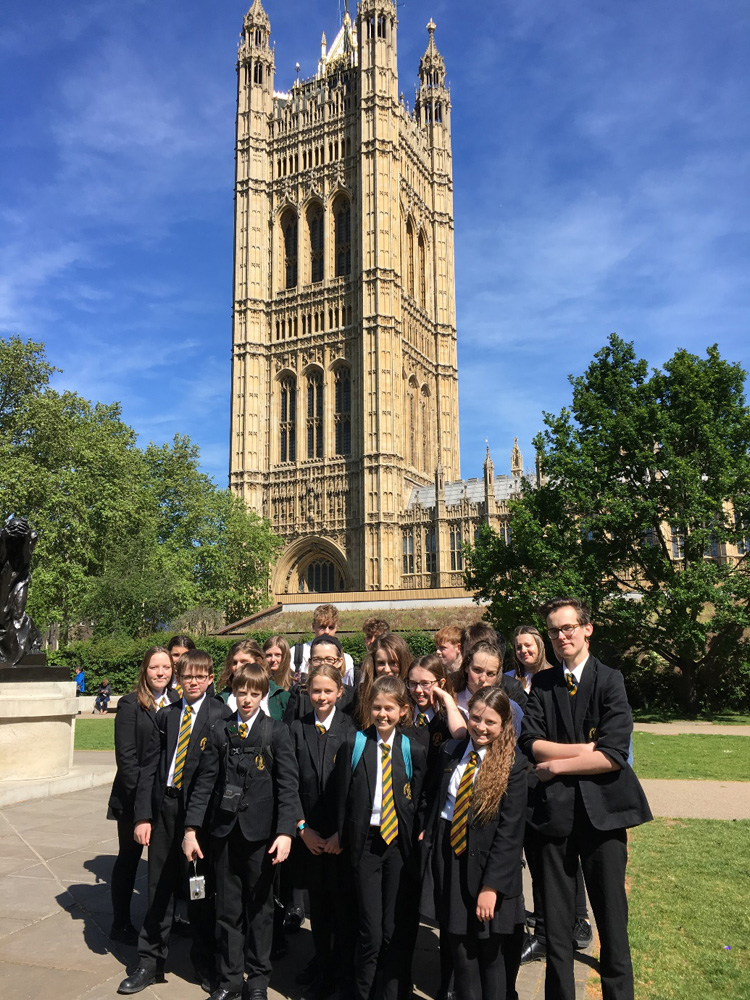 The Student Council runs from Term 5 to the following Term 4 and so the current Student Council has just come to the end of its term. I am very grateful for the contribution that students have made this year and as a thank you arranged a visit to the Palace of Westminster in London, to visit the Houses of Parliament, followed by a trip on the London Eye.

Passing the Brexit protestors, we made our way to the new purpose-built Education Centre, where we had to go through a rigorous security check before meeting our Guides. We started by watching a short film about the history of Parliament and how Parliament functions, and then were given a guided tour of the Palace of Westminster, learning about the work of Parliament today.

Steeped in history, we started our tour at the Royal Entrance, where the Queen enters for the State Opening of Parliament and then followed the route that she would take to The Robing Room, where she prepares by dressing in her robes and crown. We proceeded to Central Lobby, where we passed several politicians, although not Theresa May, as she only attends Parliament on a Wednesday for Prime Minister’s Questions.

Parliament is a working building and access to different parts of the Palace varies each day, depending on Parliamentary business, and unfortunately for us, there was a debate taking place in the House of Commons and so we were unable to go in. However, we did see the House of Lords; the most lavishly-decorated room in the Palace and a highlight of the tour. Our Guide explained that the House of Lords is the second chamber of the UK Parliament and is independent from, and complements the work of, the elected House of Commons.

The Lords share the task of making and shaping laws and checking and challenging the work of the government. We saw the golden Royal Throne, where the Queen sits to read her speech at the State Opening of Parliament, and the iconic red leather seats that we are so familiar with from seeing them on television. The knowledge and enthusiasm of our Guides brought the tour to life as we viewed the splendour of the Palace and learned about how it works today.

After the tour, we made our way across Westminster Bridge to the London Eye, and enjoyed fine views of the Capital – the weather was more than kind with a cloudless sky and we spotted Buckingham Palace, Wembley Stadium, The Shard and of course, the Palace of Westminster, which seemed to be sparkling in the sunshine.